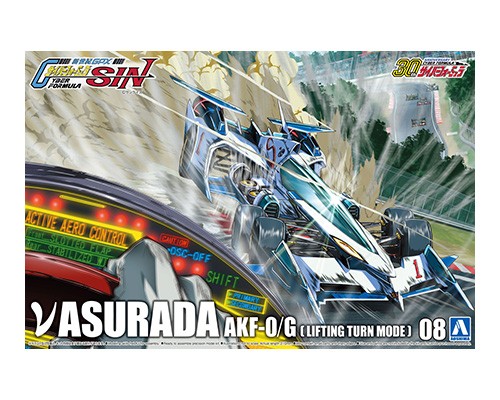 Cyber Formula is a science-fiction story originally aired in Japan in 1991. Its story is about racing in the future and race cars are equipped with computer support systems called Cyber Systems.
The ν-Asrada shows overwhelming speed with its lifting turns that change the direction of the machine in the air, the spiral boost of the 2-stage boost, and Hayato Kazami's perfected driving technique that allows him to manipulate the machine at will. However, it narrowly misses out on becoming the world champion due to engine failure and losses to its rivals, Breed Kaga and Ogre. The battle between Hayato and Kaga in the final round of the Japanese Grand Prix is one of the most memorable battles in C.F. history.