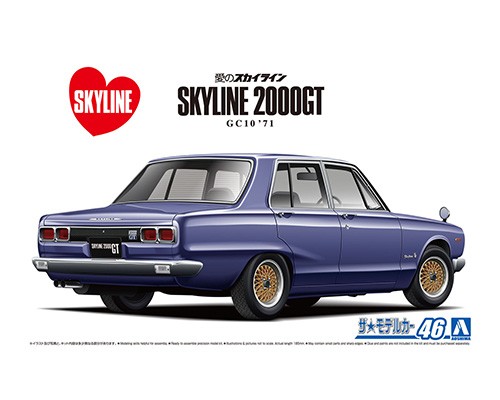 Skyline of af fection
Released on August 1968 as a full-model change 3rd generation Skyline, the C10 series became an instant hit and was widely familiarized with commercial copies such as “Ai-suka" and “Suka-G". Later in October of the same year, GT (GC10) with the L20 engine was added. The front became long-nosed to fit the straight-six engine, and its well-balanced design certainly added to the popularity of the Skyline.Many people focus on the success of the GT-R in motorsports. However, this was made possible by features such as its light weight and independent suspension which gave the vehicle a balanced configuration.
This kit replicates the 2000GT “Hako-suka" 4-door GT in its catalog spec. The molds for this kit was designed and developed in the 1970s and may not be at the quality of replication in today's standards. However, with the selectable vehicle height chassis, aftermarket aluminum wheels and various custom parts, you are able to build the “Hako-suka" to your preference.