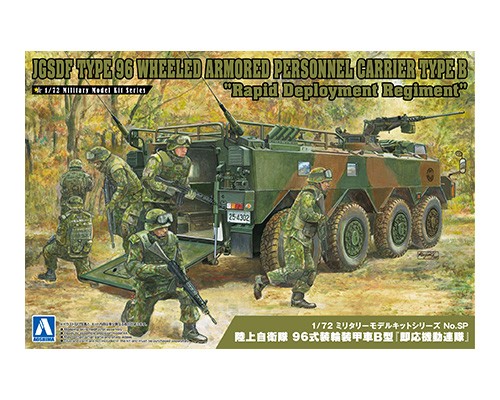 Type 96 Wheeled Armored Personnel Carrier is the first full-scale armored vehicle in Japan Ground Self-Defense Force, which has been deployed since 1996.
This vehicle is equipped with a troop transport compartment at the rear, enabling rapid transport and deployment of one rifle team (squad).
More than 300 vehicles have been deployed mainly in ordinary units across the country, and in recent years, the Rapid Deployment Regiment also has been deployed as priority.
This kit replicates the type B, equipped with a 12.7mm heavy machine gun, and includes six figures of the troops.
Decals are included for the Rapid Deployment Regiment which has been in the process of being formed in recent years.
In addition, one 81mm mortar and one figure of the firing position are included.