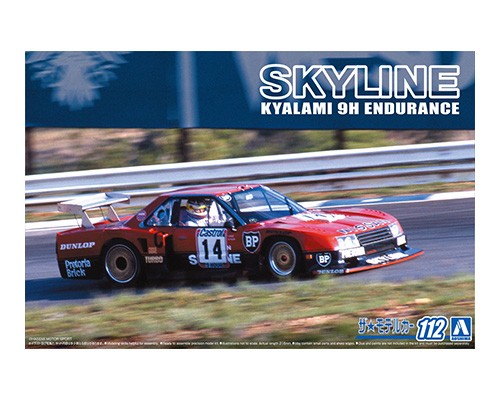 The Kyalami 9H Endurance Skyline Turbo for was originally built for the WEC Japan 6-hour endurance race held at Fuji Speedway in October 3, 1982. Unfortunately, it was not completed in time but entered the 9-hour endurance Kyalami Grand Prix Circuit held in South Africa in November. The race resulted in a retirement due to the car going off-coarse. It entered many other races, but oftentimes retired due to heat-related issues. However, for many fans it is a memorable racing Skyline.
This kit replicates the Skyline Turbo Gr. C when it entered the Kyalami 9-hour endurance race. With high-quality decals, photo-etched parts, metal seals, and color etched parts, you are able to build a realistic Skyline.