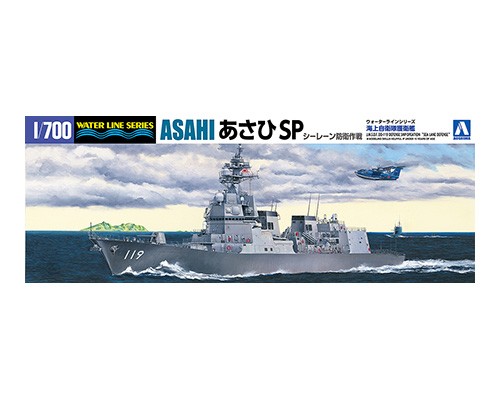 As an island nation, Japan relies heavily on import of raw materials, energy resources, food supplies, etc. and is vital to maintain safety of the surrounding sea routes. Therefore, the Japan Coast Guard and The Minister of Defense have been working on defense of its waters from any possible threat. Especially, the intrusion of sea lane by submarine is seen as an immediate threat and detecting such submarine has become a high priority.

Commissioned in March 2018 at Mitsubishi Heavy Industries shipyard in Nagasaki, Asahi-Class destroyer is an improvement from the Akizuki-class. Although the exterior features are similar, Asahi specializes in submarine detecting capability whereas Akizuki specializes in air defense. Asahi is the first destroyer to equip radar to detect submarine periscope without being spotted. Also, she is equipped with OQQ-24 sonar and OQR-4 towed array sonar, improving network sharing capability of detected submarine information between multiple ships.