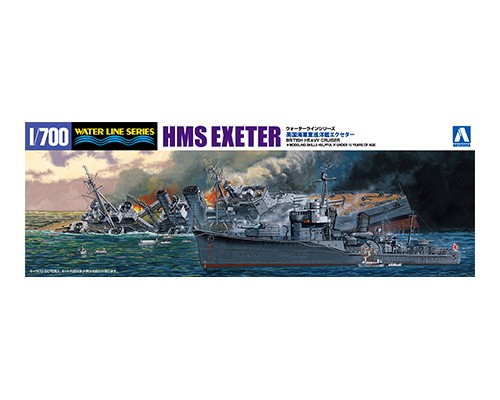 According to the Royal Navy's plan of the 1920s, Exeter was commissioned in 1931 as a York-class heavy cruiser. She became the last cruiser to be armed with 203 mm guns due to the London Naval Treaty. She was also equipped with 2 aircraft catapults. After the outbreak of war, Exeter confronted the German heavy cruiser Admiral Graf Spee at the Battle of the River Plate, contributing the victory. From 1940 to 1941, she was modified with anti-aircraft guns. After returning to the fleet, she was put on escort missions in the Atlantic then transferred to the Pacific. At the Battle of Java Sea, Exeter engaged the IJN fleet where she was sunk on March 1, 1941 after a fierce battle.