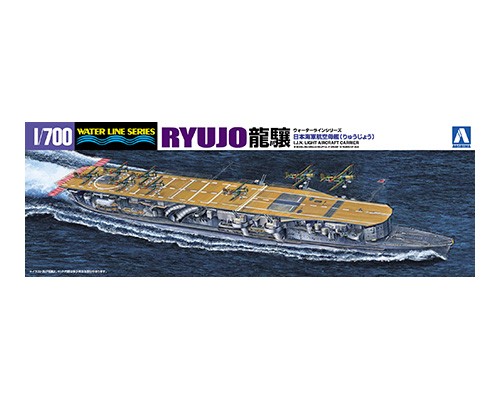 Ryujo was a light aircraft carrier of I.J.N. during the early 1930s. Small and lightly built in an attempt to exploit a loophole in the Washington Naval Treaty of 1922 that carriers under 10,000t standard displacement were not regarded as aircraft carriers, Ryujo had her first refit after the Tomozuru incident, followed by a second refit to incorporate the lessons learned from the Fourth Fleet Incident. With her stability improved, Ryujo returned to service and was employed in operations during the Second Sino-Japanese War. During World War II, she provided air support for operations in the Philippines, Malaya, and the Dutch East Indies. Ryujo next participated in the Battle of the Aleutian Islands in June when she first carried Zero fighters. She was sunk by American carrier aircraft at the Battle of the Eastern Solomons on August 24th, 1942.

This model kit recreates the ship after she had the second refit.