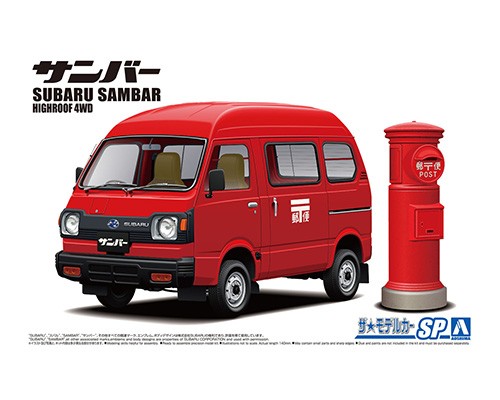 The Sambar was developed with Mr. Shinroku Momose, the father of the Subaru 360, as chief engineer, and the first model appeared in 1961.
It had an advanced cab-over style for a light truck at the time, with a rear engine layout that drew out stable driving and immense traction performance, the four-wheel independent suspension became the identity of the Samba, and this tradition continued until the end of the 6th generation sales in 2012.
This kit replicates the late model K88 of the third generation "Rigid Sambar", and it reproduces the specification of the postman's vehicle of the past by new decals.
Since the mold was developed in the 1950s , there is also a part that differs from the latest kit of the present day and the degree of reproduction and philosophy, but the normal 10-inch steel wheels have been added with modern quality parts, increasing the degree of completion. In addition, a round post box made of resin is included in the same scale. Enjoy the nostalgic atmosphere together with the vehicle itself.