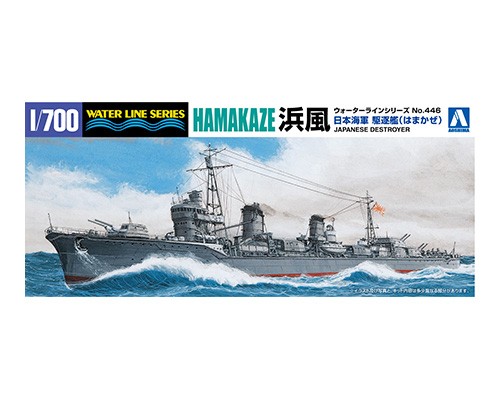 As the 13th of the shimmering destroyers, HAMAKAZE was completed at the Uraga Dockyard in June 1941, and at the outbreak of war in December 1941, she was assigned to the 17th Destroyer Squadron, which was the 1st Mine Squadron, and participated in the attack on Hawaii.
After participating in the Battle of Midway, she survived the fierce battles in major battles such as the Battle of Gashima, the Battle of the South Pacific, the Battle of the Marianas, and the Battle of Leyte.
During Operation Ten-ichiGo, launched in March 1945, she was assigned to the 17th Destroyer Squadron, 2nd Mine Action Squadron, and participated in the Battle of Cape Bohno with the battleship Yamato.
She was bombed by U.S. aircraft on 7 April and was wrecked and rendered unseaworthy, and was struck by lightning in the center of her hull and sunk.